Every time butterfly watchers raise binoculars and cameras to record a butterfly sighting, they collect important data. Recording the number, date, and location of each and every butterfly, no matter how common or rare, may seem trivial, even repetitive— but this detailed information can be invaluable to science and conservation. Butterflies act as early warning signals for habitat degradation, climate change, and other ecological forces. Community Science programs like eButterfly allow volunteers to submit checklists from anywhere and can quickly amass large volumes of historical and current observations.

Join Rodrigo Solis Sosa, our Human Network and Data Coordinator, as he explains how to use eButterfly and our latest updates on eButterfly V6.0 in this recorded webinar from July 25th. We hope you will join the eButterfly community to help us track butterflies for science and conservation.

Help us Build Big Butterfly Data for Science and Conservation

eButterfly has already been a source of discovery for several new species expanding their ranges far beyond what was previously known. From first records for the continent, like the Perched Saliana butterfly photographed and shared on eButterfly at Estero Llano Grande State Park in Weslaco, Texas in 2016, to the first Quebec record for Long-tailed Skipper photographed by a visitor right in the Insectarium gardens in 2016. There are many new states and provincial species discovered by eButterfly users in North America. Expanding to Central America and the Caribbean will accelerate the rate of new discoveries in countries with a lack of reporting.

A peer-reviewed study by researchers at the University of Ottawa compared eButterfly data to professionally-collected observations to measure the extent of new distributional and regional species richness information that opportunistic Community science generates. eButterfly contributed new distributional information for ~80% of butterfly species, with volunteers detecting species significantly earlier each year than professionals.

eButterfly is the tool for any butterfly enthusiast. You don’t have to be an expert to make a difference. Everyone can play a part, and it couldn’t be easier. Just log in to eButterfly and contribute your butterfly discoveries! 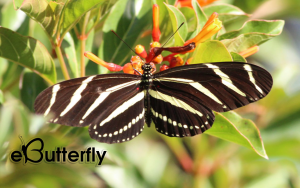